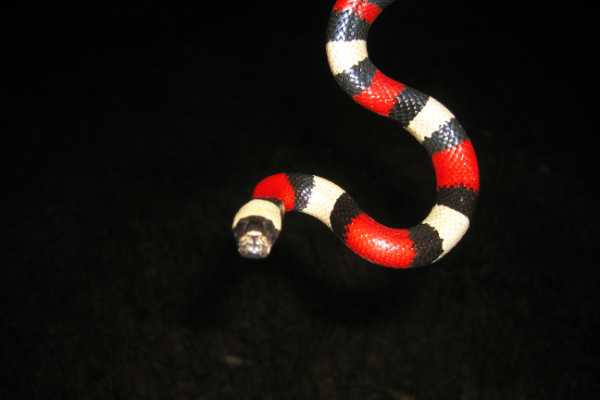 To begin, it’s important to recognize that snakes generally do not bother humans without first being provoked or attacked. So if you’ve managed to discover a snake without disturbing or agitating it, you’re already off to a good start. However, due to their potentially venomous nature, the next step is especially important: identifying the snake species. There are over three thousand species of snake in the world, but you can begin by limiting your search to snakes native to the region in which you live.

There are several methods when it comes to removing a snake from your home, once you’ve identified the specific species of the snake. In all of these instances, it’s important to wear thick gloves (gardening gloves or leather gloves work well), a long sleeve jacket, and jeans. Ensure that no skin is showing on the arms or wrists for ultimate safety.

If the snake appears to be a non-venomous species and is relatively small, the following are a few methods you could employ:

Simply Allow the Snake to Leave

This method will most likely work best if the snake was discovered near a door in the home. If that is the case, simply leave the door ajar and allow the snake to find it's way back outside.

Trap the Snake Using a Towel

Approach the snake slowly with a thick towel in hand. Swiftly but gently entrap the snake under the towel and then scoop it up into the towel bundle, enclosing it within the fabric. Then carry the snake away from your home and release it.

If you want to be extra safe, prepare a clean trash can or bucket with accompanying lid and transfer the towel and snake to the enclosed container before proceeding outside.

Scoot the Snake Using a Broom

If the snake is relatively close to a door, your best bet may be using a broom to gently scoot it back outside. Another option is to sweep it into a trash can or bucket with a lid and then carry it outside.

If the snake is large or potentially venomous, or if you’re simply uncomfortable with coming into close contact with the snake, here are a few methods for trapping and releasing the snake:

There are many models and brands of live traps, typically rectangular and used for trapping all types of animals humanely. The design allows for the snake to enter the trap but not escape. You can place a piece of cooked egg, meat, or dog food at the back of the trap to lure the snake inside. Once the snake is inside, you’re free to carry the trap by its handle to your location of release. 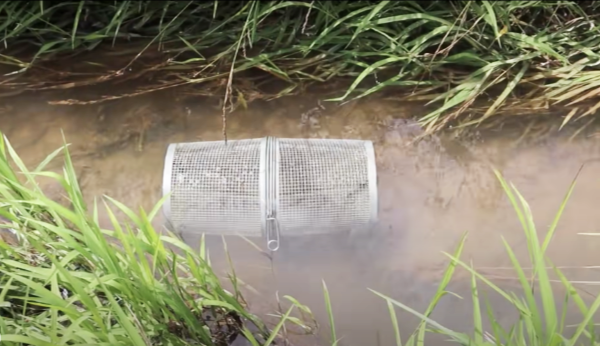 Another form of live trap that you can both purchase or fashion yourself fairly easily is minnow traps. The design for minnow traps in very similar to live traps in that it allows snakes to easily enter but not escape, utilizing a cylindrical form rather than a rectangular one. 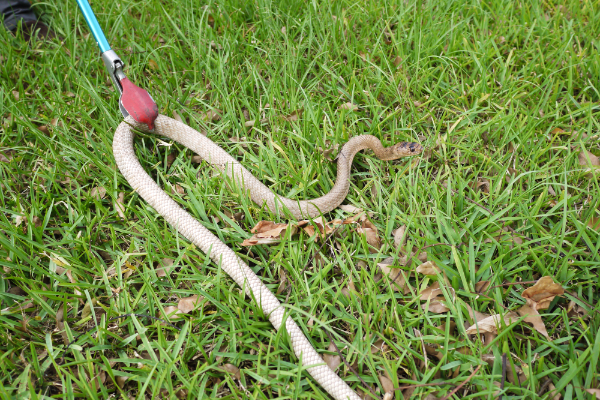 Snake tongs resemble trash pickers with a long metallic handle and a clamp at the end for picking up snakes. Snake tongs can be purchased in various lengths and clamp shapes. It’s important to keep in mind a clamp that allows for maximum comfort for the snake is generally ideal as it helps keep the snake calm while being transported outside the home. When using snake tongs, you’ll want to pick up the snake 1/3 of the way down its body to avoid the snake lashing towards you, but also to avoid crushing its head or delicate spine. Then transfer the snake into a bucket with a lid or carry to the desired location of release.

Finally, glue traps may also be utilized, although these are considered a controversial method as often times the snake’s scales are harmed in the process, and if left alone in the trap, the snake will eventually die a prolonged death. Another danger is that other creatures, including pets, may become unintentionally trapped. If you do choose to use glue traps, make sure to free the snake using baby oil or cooking oil. Additionally, certain native and endangered species of snake are actually illegal to kill or even harm, so be sure of the species you’re dealing with before choosing this method.

Always remember, if the snake is venomous or you feel overwhelmed, calling a wildlife removal service is your safest bet!