Because they live underground and rarely appear on the surface, it can be difficult to identify a gopher, since they are so rarely seen. However, they leave very distinct marks of their proximity. 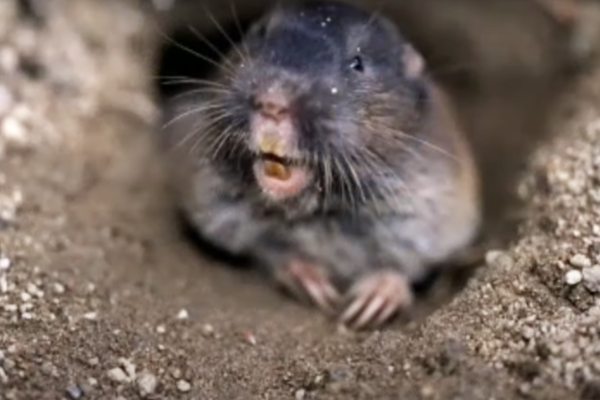 Gophers tend to appear silent but are known to emit very high-pitched (to the point of inaudibility) squeaking sounds. Some of these “ultrasonic” sounds have been recorded to be at the frequency of 48 kilohertz, which is outside the range of human hearing. However, because of their digging activities, and as a consequence of their sharp claws and teeth, common sounds that might be heard resulting from gopher activity are scratching and gnawing noises. Some types of gophers, such as the Camas pocket gopher, also make chattering or crooning sounds, and their young can make “twittering” sounds.

Gopher droppings are retained underground, so they will not appear on the surface of the soil. They tend to be a dark brown color, shaped like slightly elongated circles, and fairly small in size. This waste acts as a natural fertilizer for the soil.

Gopher activity is most easily spotted by the effects on the soil in the area, which act as their tracks. A single gopher can produce several mounds in a single day. Over a year, they can move an enormous amount of earth (more than a ton) to the surface. The soil of the mounds tends to be dark and moist since the soil has been freshly turned over. When the area is not well-irrigated, these mounds tend to appear in colder months, when the moistness of the soil makes it easier to dig. However, in well-irrigated areas, the gopher may dig year-round, and therefore mounds will appear year-round.

These mounds are the clearest signs of a gopher’s presence. Viewed from above they are generally shaped like horseshoes, with the entrance covered by an earth plug. They are usually between one and two feet in diameter, and up to a foot high. Because gophers break up the earth as they dig, the soil of the mounds will tend to be finer than those produced by moles, which may contain clumps. While moles tend to produce conical mounds of soil, gophers usually push out dirt into fan-like patterns. A fan-like mound indicates an actively working gopher, but once the gopher has finished excavating this area, the mound will begin to appear more roundish. The mounds usually cover an area of between 200 to 2,000 square feet, since this is the size a gopher burrowing system can become. The entrances to the tunnel systems are distinguished by piles of looser soil covering an opening. Gophers dig one to three holes (therefore produce this many mounds) per day, and average at about seventy per month. They can produce about three hundred mounds per year. These mounds can act as beds for weed growth, and also interfere with mowing or farm equipment on lawns. They are also hazardous if they appear in athletic fields, where they can easily trip users. Furthermore, the constant digging weakens the overall structure of the ground and can result in multiple cave-ins.

Gophers also produce specific “feed holes”, which are smaller, sometimes only the size of a coin, and which allow them to eat vegetation on the surface. These holes will also be plugged once the gopher has finished feeding. These can, therefore, be identified as small holes around which vegetation has been eaten away. 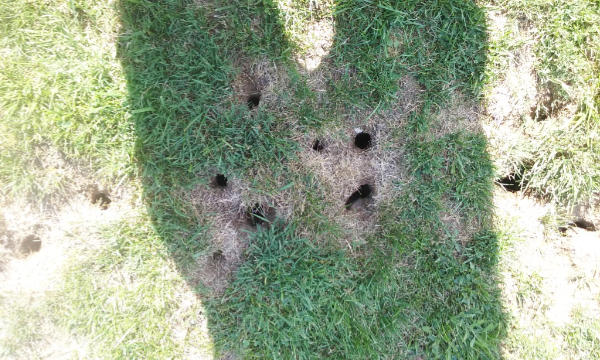 Although this movement of soil can be very beneficial in aerating it, gophers also bring a lot of very visible damage to the region they make their home in. They consume and uproot many plants in proximity to their burrows, which is problematic if they choose to build their home within a garden or agricultural field. They may also tear up grass, or consume the roots so that it doesn’t grow back. They often drag plants from the surface down into their tunnels. Therefore, sudden and unexplainable damage caused to, or even total loss of, plants can indicate the presence of a gopher. Yet they also cause problems for the plants that they do not visibly destroy or consume: by gnawing at the roots of trees and other kinds of vegetation, they seriously damage the roots. Therefore, they can also be identified through the waning of certain plants. If this is noticed, the ground around the plant should be checked for dirt mounts. If those are also present, it is most likely that a gopher is eating the roots of the wilting plant. At times, because this is not evident straight away, by the time the gopher’s presence is realized it may not be possible to save the plant.

In snowy regions, gophers may also feed on the bark of a tree (called “girdling”) several feet above the ground. Gophers also feed on the crowns of plants, killing them before they are able to blossom. Therefore, gophers damage both new plants and old ones. Since they may attack the bulb from underneath, what might be noticeable on the surface is the absence of a plant.

Gophers also may damage sprinkler systems and other kinds of underground utilities, including wires and pipes, by gnawing on them. This often disrupts irrigation systems (both natural and man-made), which may eventually cause soil erosion. Because their burrow systems are designed for water conduction, they interfere with irrigation by diverting the water flow and thus contributing further to soil erosion.

It is possible to view the tunnels by digging below the surface of the soil, though sometimes it may require digging up to twelve inches down. Since there are no surface tunnels the mounds do not portray the overall shape of the burrow, however, they tend to be built in a line, which gives an impression of the underground structure. They may dig up to eight tunnels, which can extend up to eight hundred feet each, and are of varying diameters. If these tunnels are constructed beneath houses, they can also cause serious problems for the structure of the building. The land may cave in underneath, harming the foundation of the house.