Life as a starling cannot exactly be considered a fulfilling life in the ecosystem of the bird species. Starlings, for all the beauty and nature’s aura they exude in the skies, are commonly reduced to pests—a civil inconvenience that many people hate.

For all their gravity-defying acrobatics, their murmurings, their perfect synchronization in the skies, starlings can be the foulest of fouls (pun intended). Starlings are considered one of the worst bird species in all of North America, but history tells us that this problem may have been self-inflicted. Rumor has it that starlings owe their overwhelming mass population to the Americans. It all started in 1891 when a number of sixty to one hundred starlings were let loose in Central Park in the hopes that starlings, which William Shakespeare had mentioned in his works, would become established in the New World. Whether this story is true or false is unknown, but it is commonly believed to be true to this day.

Starlings are a bird species of an Asian descendent, small to medium-sized birds of the class called ‘Passeriformes’: a class of birds usually differentiated from other birds by the arrangement of their toes, which allows them to perch effectively on trees. So that they are easily adaptable to this mode of living, their body anatomy is structured in such a way that their feet are usually strong, and they have a lot of flight power. It is less easy to distinguish male starlings from females as there is usually little difference in the plumage – the totality of feathers covering the bird – of both genders. The plumage of the starling is generally brightly colored due to the arrangement of the feathers; other physical features include lengthy tail feathers and some coloring upon the face, which can be owed to natural pigmentation or body coloring. In its bright coloring, the plumage of most species is dark with a metallic shine attached.

We should observe that while starlings are part of the Passeriformes class, they are also a class of their own in which different forms exist; some of these forms being the common European starling, the Micronesian starling, the Mynas (Asian species), the Glossy starlings (African species), Kenrick’s starling, Abbott’s starling, the Bali Starling, and the Slender-billed starling amongst others. They are pretty strong, can adapt fast, and are super smart and clever. They are also cavity-nesters, which means that they are able to out-compete native birds. 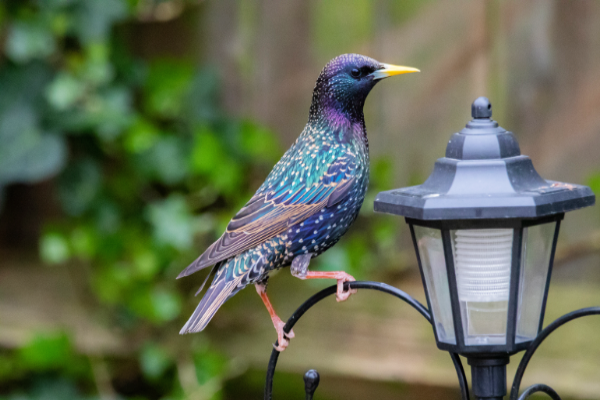 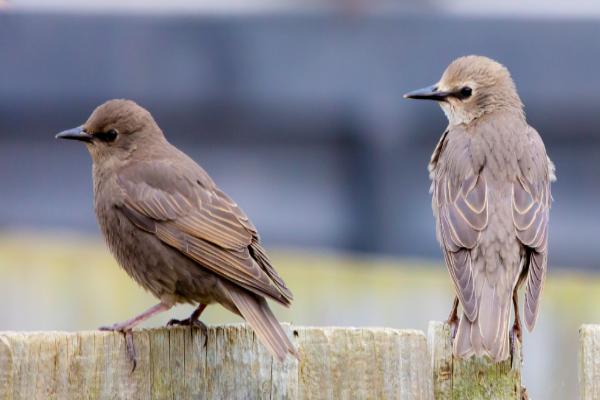 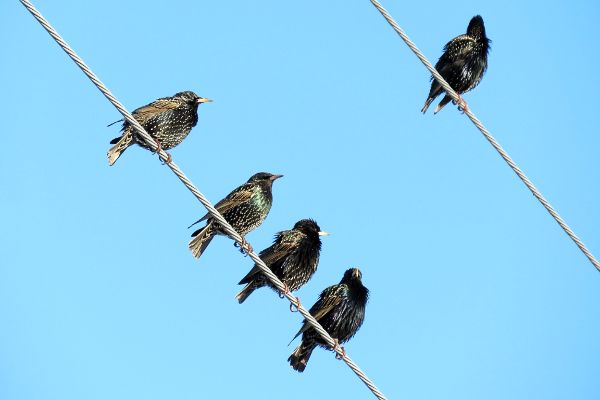 Starlings tick all the available boxes in dietary composition. Starlings are omnivores when it comes to feeding. As a result, fruits and insects form the vast majority of their diet. Other sources of food, such as seeds and nectar, play a part in the diet of different species of these birds. For instance, while many species feed on seeds and parasitic mistletoes, the Micronesian starling feeds on eggs of seabirds while the Red-winged starling of South Africa feeds on the coastal shrub native to Australia called the Acacia Cyclops.

Starlings have also been known to feed on fermented fruits, containing alcohol. Based on a scientific study, however, it has been observed that starlings have enzymes which help dispose or break down the alcohol, thus avoiding intoxication. Most species feed on grubs too – a group of insects of the order Coleoptera – normally found on trees and wood.

Just like any other animal species, most of the havoc the starlings wreak on the human environment is made possible only due to the fact that they move in groups. This is where a huge part of their animal instinct and intelligence becomes strikingly obvious. As part of their behavior, these birds are cooperative with their surroundings, often moving in groups or large flight formations; these formations often leading to a huge number of birds in a particular territory roosting or settling down.

Starlings also have limited interrelations with humans as well; their interrelation with human beings can be seen in the fact that based on analysis, starlings have been seen to incorporate sounds heard around their territories into their vocals; sounds such as alarms, honks and human speech patterns. Starlings have also been seen to be capable of recognizing human calls by their voices and so, are oftentimes studied as a part of the evolution of human communication. The ability of starlings to incorporate sounds can be traced to their inherent ability to imitate sounds from different instruments or places.

Their intelligence can be likened to the 8th wonder of the world, conventional laws of physics dictate that due to their usually large size, it is almost certainly impossible for there not to be collisions when they move in such close and coordinated manners—but their intelligence gives them the uncanny ability to swirl so that one does not collide with another, an occurrence that could potentially lead to breaking of the starlings’ wings and death.

Starlings have always been known as an invasive species of birds as they often compete with other classes of birds native to certain territories for habitats. Starlings can be found in many different forms of habitats in territories such as Europe, Africa and Asia. The only places where starlings have not been seen to settle are sandy deserts. The habitat utilized by starlings normally depends on the species in question; for instance, while Asian species are more accustomed to inhabiting closed evergreen forests away from human territory, African species are more accustomed towards inhabiting open territories such as woodlands and savannahs. The European starling is also an inhabitant of open and human-dominated territories such as farms and urban areas.

Ignore the choreographed display, co-ordination and aesthetic appeal that their unity in the sky brings. On land, starlings are easily the grossest bird species you can ever encounter. Starling droppings have proven to be very harmful to man because it contains Histoplasmosis Fungus. Histoplasmosis affects the lungs and can wreak devastating havoc on the human body if left untreated. Starlings, like pigeons, have high acidity in their droppings and research has shown that the starling poop can be damaging to metal. This is because, like pigeons, starlings do not urinate. Their urine is in the form of uric acid which comes out with their droppings, thus the severe acidity.

In recent times, there have been innovative solutions to reduce starlings teeming numbers from settling into an area. In Rome, the city uses special speakers that emit sounds of their predators and sounds of distress calls by other starlings to lure the birds away. Sometimes deterrents work, but when they don’t, starlings can cause innovation-defying challenges. They cause hundreds of millions of dollars in damage to agricultural operations yearly. Their nests are also a potential fire hazard. Starlings often come to roost in places where there is a supply of food and a suitable habitat. So, in order to be protected from starlings in your vicinity, cut out the supply of food and water.

In conclusion, while it is largely true that starlings can wreak carnage in households and cause unprecedented levels of damage to mankind, starlings actually do make a good pet especially as they learn how to talk and whistle— just ask Wolfgang Amadeus Mozart, the renowned composer who had a pet starling that he coached one of his melodies.