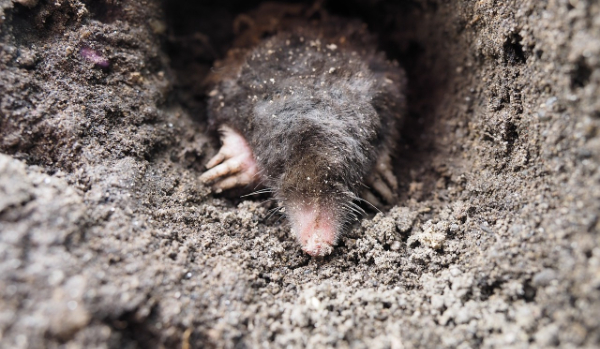 Moles belong to the Talpidae family (shrews, voles, etc.) and are small mammals adapted to life underground. The males are slightly bigger than the females, and their life span is generally 3 years, but some can live up to six years. There are about 42 different varieties around the world. They are about 6 inches in length, usually with short black fur, and have characteristic little eyes and ears and a pink fleshy nose. Their back limbs are short, but they have extremely powerful forelimbs, that look like spades with huge claws, and these are essential for digging into the earth.

Though many people think they are omnivores, they are actually insectivores, with a diet comprising of primarily earthworms, insects, and larvae, hence the need to dig underground for their prey. Although seen as vermin, moles can actually have a positive impact on the ecosystem by eating slugs and other insects, and they contribute greatly to fertilizing and aerating the soil. Though these animals may be little, they are, by nature, dangerous to the landscape. The damage they can do to fields, open grassland, and our gardens, can be devastating.

When they burrow and forage for food, they rip through the earth tearing at the grass, causing dead patches in your lawn. They uproot and kill off plants and vegetables. Trees are gnawed at and can become irreparably damaged, and mounds of earth and dirt from tunneling look unsightly, impacting the aesthetics of yards and gardens.

But how do you go about solving this problem? You need to recognize their habits and behavior in order to eliminate their presence. A good start is to regulate the moisture in your garden or flowerbeds; this will limit the number of insects that are likely to be drawn there. But it’s hard to maintain this method, and it can’t be guaranteed to be sustainable in the long term. Planting Castor beans are another option and can be a good deterrent, but this can have an adverse effect, due to it containing a poison called ricin which can cause other issues. Because moles live underground, it’s not always possible to catch sight of them or know for sure where they are living. Although their tell-tale signs let you know their relative whereabouts, it would be best to bring in a professional, who can locate their habitat and control their destructive activity with the correct training and equipment.

So, yes, we know that moles are dangerous to our vegetation and plant life, but what about their danger on humans? Although moles have the potential to bite, it is practically unknown for them to attack humans. Because they live underground, they rarely come into contact with humans, but they can, however, have an effect on our health through indirect contamination.