Rat Removal: How to Go About It Yourself in The Best Way Possible

There are many different types of pests that can afflict households depending on their location. One of the most common of these pests is rats. The two most common rats in the United States are the Norway Rat (AKA the Brown Rat or Sewer Rat) and the Roof Rat (AKA the Gray Bellied Rat). As the nicknames might suggest, the differentiation that is most commonly made upon seeing these rats is the color. However, there are multiple other signs that give away what type of rat one might be dealing with. For example, the Norway Rat is usually inactive during the daytime and will eat just about anything, including discarded food. Meanwhile, the Roof Rat is smaller in size, and will typically limit their diet to nuts, fruits, vegetables and seeds. They are also more agile than their brown counterparts.

One of the biggest threats that these rats carry is disease. Their saliva, urine and feces all carry the risk of spreading diseases like murine typhus, leptospirosis, and trichinosis among others. The disease doesn’t necessarily have to come from the rat itself, but from fleas and ticks that are catching a ride onboard.

Now we will examine the steps on how to best prevent the spread of these rats into the household. Of course, the safest option is always to call a professional service that specializes in the removal of these pests. However, it is not always possible to do this, so it falls upon the owner of the household to deal with the rats. Here are the steps one should take to rid themselves of these sorts of infestations.

The first step of rat removal is to know what you are up against. Knowing the location and the species of rat you are dealing with are the crucial first steps to getting rid of them. Knowing the location of the rats also allows you to know where to place traps to catch them. These locations can be located by looking for bite marks and large amounts of feces around gaps in the walls, floors and ceilings. These gaps can be as small as a quarter of an inch, and all gaps half an inch or bigger should be closed. 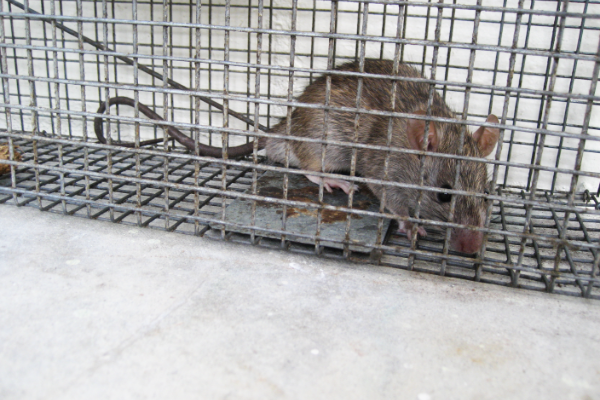 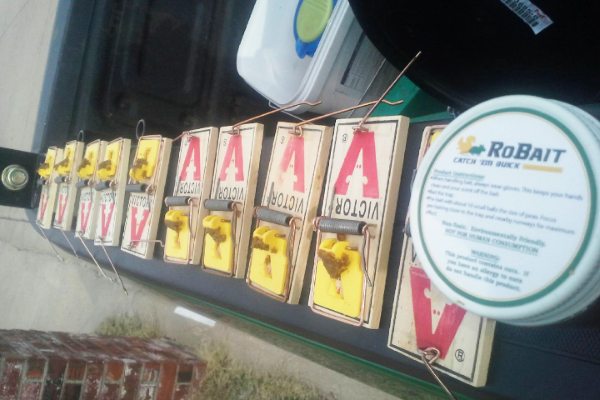 There are multiple ways one can go about drawing the rats out and getting rid of them. One way is to lure the rats into traps that have been strategically placed around the household. This method can be used when one doesn’t want to place rodenticides or other poisons around the house. When using traps, the first step is to make sure there are plenty of them. The more traps there are, the higher chance of catching the rats. A higher number of traps is also useful because there may be more rats than initially believed in the colony.

As for the placement of these traps, they should be put in areas of high rat activity. Dark corners, behind appliances and large objects, in the attic (if there is one), and wherever rat droppings are found. One must be careful to keep both pets and small children away from these traps.

There are also multiple types of rat traps. Snap traps are some of the most common, containing a mechanism that will instantly kill the rat when the bait is removed from the trigger. Another type is a glue trap. As the name indicates, this trap will glue the rat to the surface, killing them by keeping them in place and denying them any food or water. These have the advantage of being cheaper and more subtle than snap traps, but can only be used once and might be viewed as inhumane. There are also live animal traps, which allows one to capture the rats alive and release them away from the home. For non-toxic baits, there are a variety of edible products that can be used. Peanut butter is a common one, as well as dried and non-dried fruits. There are also non-poison baits available on the market if sacrificing food is not approved of. 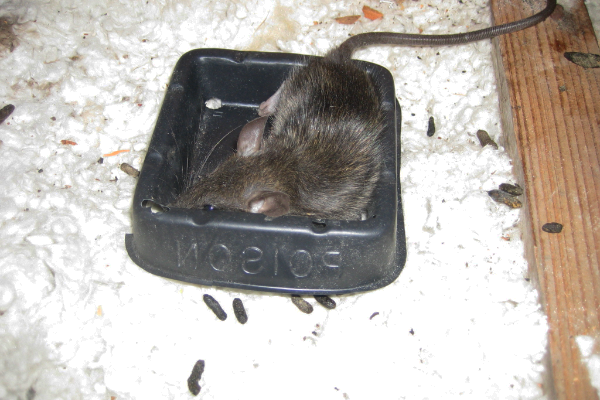 If all of the previous steps with the traps are unappealing or the idea of leaving out food for other potential pest problems does not sit well, then there is another option. When buying poisons at a store, it is important to read the instructions that come with it. Some poisons act as bait, while others do not. These baits commonly come in the form of pellets, though they can also appear as blocks and other forms as well. As with the traps, both pets and small children should be kept away from these poisons at all costs.

Again, there are a variety of poisons available, each with different effects. Vitamin D based poisons are slower and create an overdose of fat-soluble vitamins in the rats. Bromethalin-based poisons act quickly, with fast neurotoxins killing the rats extremely rapidly. There are also Fumarin and Warfarin-based poisons, which are the slowest acting poisons. They might require multiple dosages for the rats to die from them.

With all of these poisons, it is important to regularly check for rat corpses around the house. The ideal place for these poisons to be located are near exits to the outside so that when the rats consume the poison and go elsewhere, they die outside. However, that may not always be possible, so routine checks to clear out the dead rats are important to get rid of the infestation.

Of course, when in doubt, one should always turn to a professional if the rats are actively causing health issues to those inhabiting the house. Also, if prolonged DIY efforts to get rid of the rats are unsuccessful, again, turning to a professional should be the response. They are the experts, and when health situations like this are involved, listening to experts is usually the best option.