Opossum Removal: How to Get The Marsupials Out of Your Home 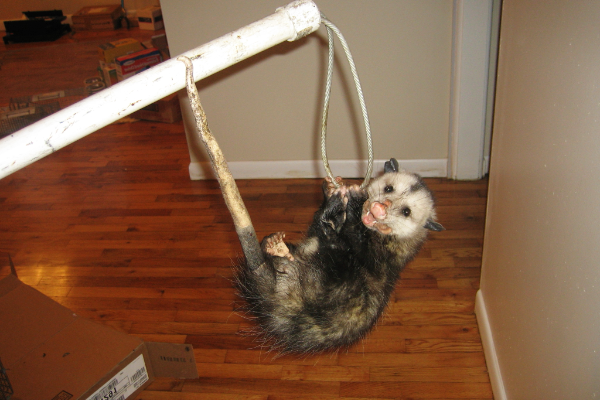 Opossums might seem like cute little creatures that climb around with their young in pouches, similar to their marsupial cousins in Australia. However, these omnivores have learned to adapt to human neighborhoods, and can become quite the pest if allowed to run rampant around a home or group of homes. It is possible to get rid of these creatures without professional help, though there are steps that one must take in order to do that.

The first step is to identify what kind of opossum it is. The most common type and most likely to cause problems is the Virginia opossum. Usually the size of a small cat or dog, these are found anywhere from Canada to Costa Rica. These opossums are active throughout the year, though as with many creatures, that activity decreases during the winter months. They are also nocturnal scavengers, who will spend the majority of time looking for leftover food amongst the trash. The Virginia opossum usually ranges from about 13 inches to 22 inches in length, with white hairs scattered around their coat. There are two less common and less problematic species of opossums. They are the Southern and the Gray Short-Tailed opossums. Both are found in the more tropical regions of Central and South America and are smaller than their Virginian relative.

While not overly aggressive, opossums do carry the risk of bringing disease into a household. These diseases include leptospirosis, coccidiosis, tularemia, tuberculosis, and toxoplasmosis. All of these are possible to contract if one is bitten or scratched by an opossum, while contact with the urine and feces also puts the human at risk for disease. Regardless of whether or not the opossum is playing dead, contact should be avoided just in case. 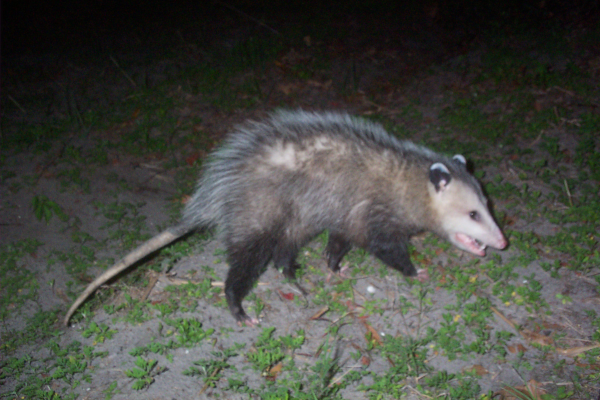 The first step in removing an infestation of opossums is to find out what kind of situation one is dealing with. The initial signs of an opossum hanging around are usually noted by scratching noises, scratch and bite marks on the trash cans, and new, foul odors hanging about the home. It is possible that these are simply signs of an opossum dropping by one night, but if they are repeated frequently then there is likely a nest nearby. If that is the case, look for possible nesting areas that are covered. Brush, logs, crevices or other holes around the house are all likely areas for the nest.

If unsure about whether or not the disturbances are actually coming from an opossum, the easiest way to check is to set up a camera at night and simply lay out some bait. That way it can be determined if the disturbances are from the opossum or another creature like a raccoon. 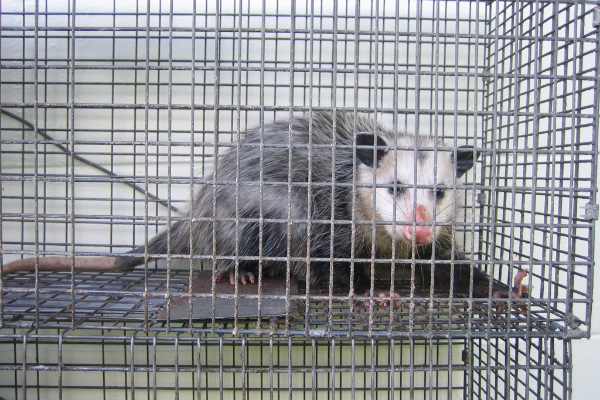 Once the situation is determined and the nest is confirmed, certain steps should be taken to safely prevent the opossums from changing location and allowing for their removal. The first of these steps is to seal off their entry points into the house. These include entry points onto the roof, as well as trees that lead up to it. Opossums can most certainly climb and will make their way in through roof cracks if possible.

As for actually dealing with the opossums themselves, a live trap is usually considered the best and most humane way of removing the critters. These traps should be about 12 X 12 X 30 inches with a slanted door, so that the opossum will be able to easily enter while being unable to escape. The traps should be placed in a spot frequented by the scavenger, as this gives the highest chance that it will catch any opossum that happens to wander into it. To further the chances of it entering the trap, placing bait in the trap will surely help. Fortunately, just about any type of bait will work to draw the opossum to the trap. However, marshmallows, leftovers, pet food and tuna are all favored by opossums and thus might be more desirable for the trap.

Regularly check the trap to see whether or not the opossum has taken the bait. Once the animal is caught, call animal control so that they can take it and properly release it away from the home. If one wishes to remove the opossum from the trap personally, be sure to wear gloves and take it to a wooded area far away from the home to be released. It may attempt to play dead, but will eventually leave.

Of course, there is always the chance that other opossums could come in and set up their own nest in the area. There are a few ways of preventing this. Removing any attractive features will help discourage the opossums from being tempted to the area. Properly sealed trash and pet food kept inside takes away two of the primary attractants of opossums. Another way of discouraging continued activity is to set up motion-sensored lights around the yard. This makes it so that when the scavengers approach, they are frightened off by the lights. There are also sonic repellents that emit a high pitched noise to drive off the opossum. However, if there are pets in the household, these are not advised, as they can affect the pets just as much as the scavengers.

Other repellents include pet scents and chemical repellents, both of which serve to frighten the opossums away. There are also homemade recipes made of ammonia, garlic and spice sprays that can help drive away future opossum incursions.

As always, when in doubt, call for help. If the opossum is acting strangely or more aggressive than usual, back off and leave it to a professional. There is no need to risk getting infected with one of the diseases mentioned above simply because of an excursion with an opossum. Hopefully these tips should help out anyone who might be dealing with one of these infestations or show how to prevent one of these infestations in the future.