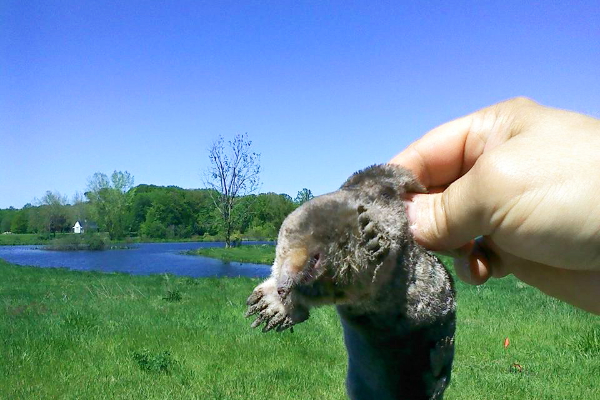 It is extremely unlikely for a human to get bitten by a mole since the chance of getting close to one is exceptionally rare. However, should you have the opportunity to see one, it is advisable to keep your distance, and you are certainly advised not to attempt to pick one up.

Moles can carry rabies, though it has not been documented that any human has ever contracted rabies through a mole bite. Moles can, however, cause illness to humans without actually coming into direct contact with them. Moles, as with most living mammals, can be hosts to fleas, mites, ticks, and other secondary pests. These can then be brought into your garden indirectly, and if you have a cat or dog roaming around your garden, and a mole is in the vicinity, the parasites can easily transfer from the mole to your pet and be brought into your home. And this is where the danger of infection to humans can occur.

A flea can transfer from the mole to your cat or dog, and whilst grooming itself, your pet can swallow the flea, which can result in it getting tapeworms. The tapeworm’s eggs can be found in your pet’s feces or bedding area and can be transferred to humans, especially inquisitive children, who could come into contact with it and accidentally ingest it, causing symptoms such as diarrhea and loss of weight.

If a tick bites a mole that has the bacteria, then the tick becomes infected, and can then infect an animal or human’s blood. The tick’s bite can often go unnoticed, but can cause anything from a mild rash to debilitating damage of the nervous system and can lead to temporary paralysis.

This is also spread by ticks and quickly escalates into a rash generally starting at the wrists or ankles and is accompanied by a fever and headache. The symptoms can last for two to three weeks.

This is another disease that can be spread by an infected tick from a mole to humans. The bacteria enters the body through an area of broken skin and can cause an ulcer at the contact area and swollen lymph nodes.

So, although it is highly unlikely for humans to catch any of these diseases directly from a mole, it is in your own best interest to keep away from areas where it’s obvious moles have been. Limit your interaction with animals or pets that may have come into contact with a mole or tick. Keep away from natural environments where ticks thrive, such as long grass, and always follow health and safety guidelines, by washing your hands regularly.