Skunks are notoriously stinky little mammals. These creatures are best known for their ability to spray an extremely smelly liquid when threatened. Skunks come in a variety of shapes, sizes, and colors. Scientists have identified 10 different skunk species across North, Central, and South America. Some are the classic black and white striped, while others are brown, cream, or reddish in color.

The different skunk species range in size, but they are all small-medium sized mammals. The smallest adults are a little over one foot long, and the largest are up to three feet long including their tails. All species have short legs, long bodies, and a relatively stout build. Because they are fond of digging, their front legs are muscular, and their claws are long and sharp. 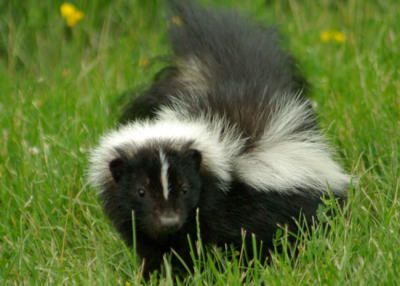 Skunks favor pastures, clearings, and open land that borders on forests, although some species live in deserts and mountains. 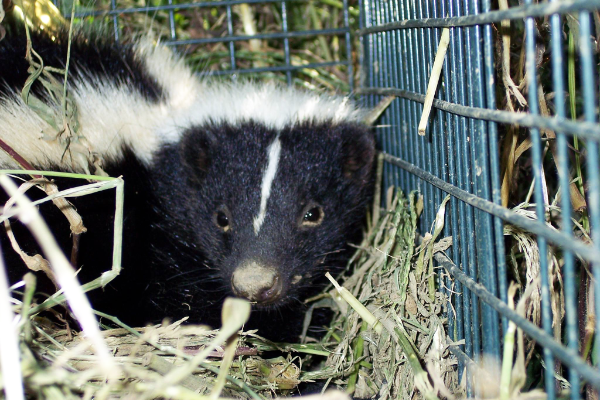 The skunk is an American mammal that is related to polecats, stink badgers, and some members of the weasel family. They are known for the unpleasantly strong smell they spray and vary in their different colors of appearance. They can appear in either brown, ginger, cream, or black and white colors. Skunks are kept as pets by some families and are tamed by the removal of the scent gland.

Skunks are generally not harmful to humans and don’t attack, this can only happen when the animal feels threatened or when it is trying to save its offspring from harm. The main defense mechanism a skunk has is the pungent smell it sprays. The smell is emitted from their anal gland towards the threat. Before the skunk results in spraying a threat or an intruder, it gives several warning signals to stall the intruder or drive the intruder away. The different warning signals the skunk gives to the intruder include spitting, shaking its tail, stamping the ground, fluffing its fur, and growling. If this intruder, threat or predator persists, it raises its tail and sprays the skunk odor. Besides the aforementioned defense methods of skunks, some skunks also bite as an attack or defense mechanism.

Like previously stated, skunks are not violent towards humans unless put in harm’s way or threatened by an intruder, and a healthy skunk can rarely bite a human. The majority of incidents recorded where a human was bitten by a skunk have been related to rabid skunks (i.e. skunks with rabies). Also, a tamed skunk that has had its scent glands severed often bite to defend itself. Therefore, the two major reasons while a skunk can bite a human is either because it has lost its natural means of defense, which is the scent gland, or because it has been infected with rabies. Please do not approach any rabid skunk, or suspected rabid skunk.

Rabies in skunks: Researches have shown skunks to be primary carriers of rabies, a disease that can be transmitted to pets and humans through skunk bites. In 2006, a record of 1,494 skunk rabies cases was reported by the United States’ Centers for Disease Control. That is approximately 25% of total reported rabies cases in all species. Rabies in skunks are of two different forms, and skunks react in two different ways when infected by rabies. The first form is the aggressive form; the skunk becomes very aggressive towards any human or pet it comes across, and the aggressive nature is shown either through biting or spraying. The second form is the dumb form; the skunk is said to be unfazed when it is in human company. There are several ways of identifying a rabid skunk by looking for the symptoms of rabies which include: foaming at the mouth, unsteady gait, being active during the day, and drooling.

Therefore, the answer to the question “Do skunks bite?” is yes, and this happens because of the above reasons.