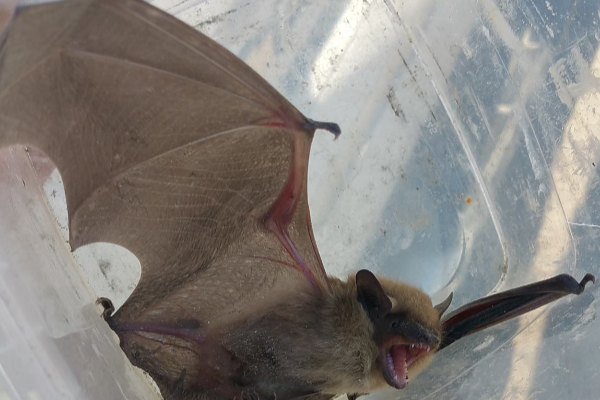 Do bats bite? The simple answer is yes. Bats can bite and have bitten humans before. However, the full explanation is a little more complex than that. Bats do not attack people unprovoked. They always have a reason for biting a person as it is a form of self-defense. If bats feel threatened or are protecting something, they will bite or scratch a person.

Biting is always their last line of defense. This is because, compared to humans, bats are tiny and fragile. Humans are to bats as bears are to humans. A human would not get into a fistfight with a bear just because they wanted to. They would lose. The same goes for bats. They know they are likely to lose a fight against a human, and so they go out of their way to avoid humans. They are active at night, while most humans are active during the day, so that lessens the risk of a human encounter. They also tend to live in isolated places like caves and abandoned houses, where humans are not likely to be. If a bat happens to get into someone’s house or shed, it is not likely it is going to attack them. Instead, it is going to fly around frantically looking for a way out. All someone has to do to get a bat out is open a door or window. After, of course, calling animal control.

But what about stories of people getting bats tangled in their hair? The most likely reason a bat is in a person’s hair is that they sensed a bug in there, and dove down to get it. They were hunting for something to eat, the person just got in the way. They were not purposely attacking a human.

However, just because bats don’t bite people unprovoked does not mean their bites aren’t harmful. Even though their mouths are small, people who have been bitten by bats say that it is very painful. It is said to feel like getting a bunch of flu shots all at once, in the same spot. And while bat bites don’t itch, they should always be checked out by a medical professional. This is because bats carry a wide variety of diseases. In fact, even though bats are small, they are the biggest rabies risk in the US. And while only 0-3 people die of bat rabies every year in the US, it is still not a pleasant experience to go through.

But if that wasn’t enough, bats carry more diseases than just rabies. They can also carry coronaviruses, hantaviruses, henipaviruses, and filoviruses. So if a person gets bit by a bat, there is a chance they can be infected. Those are some serious viruses and the reason bat bites need to get medically treated.

However, just because bat bites are rare doesn’t mean people shouldn’t be cautious around them. Bats are wild animals and their behavior is unpredictable, and they deserve just as much respect as other wild animals.