The opossum is a marsupial – a type of mammal possessing a front pouch that contains teats. They are originally from South America, but after migrating to North America roughly three million years ago they are now native to both continents.

The species found in the U.S. and Canada is called the Virginia opossum, which is the only marsupial found in these countries. However, there are over a hundred species in total. They are often called “possums”, but this is incorrect. A possum is similar in appearance to an opossum but only found in Australia, New Zealand, and China.

The opossum is small to medium-sized, about 2.5 feet long from nose to tail, and weighs between eight and thirteen pounds. White or gray hair covers their bodies, and they have pointy faces with long snouts, roundish ears, and a tail resembling that of a rat. They have an uncommonly full jaw for a mammal, containing tiny incisors, large canines, and three-pointed molars.

The females possess the pouches which distinguish them as marsupials. The males possess a forked penis with two glands, like most other marsupials. Opossums stand with their feet completely flat on the ground, and their hind feet do not possess claws. 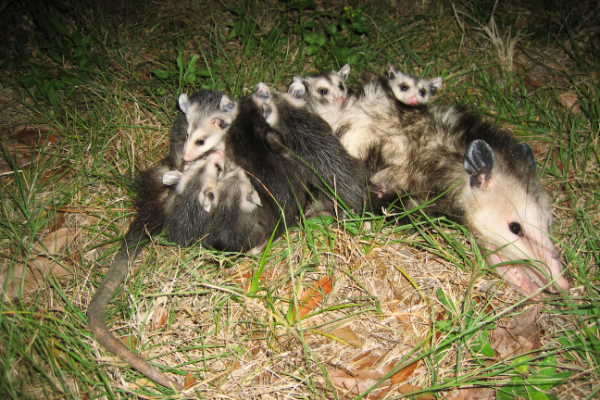 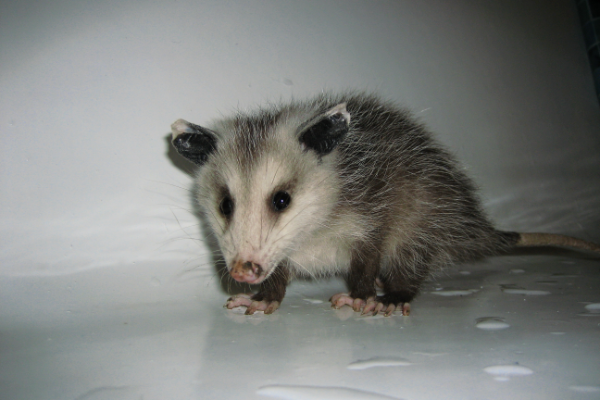 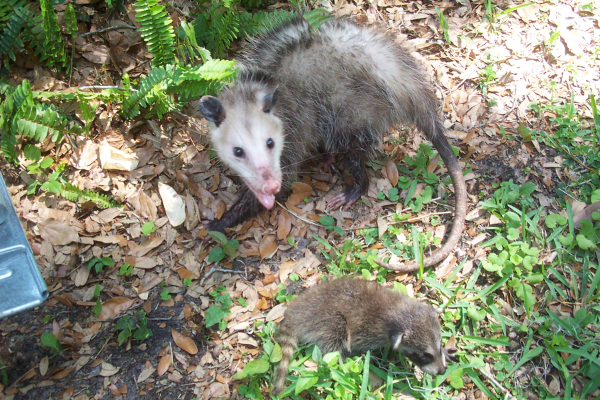 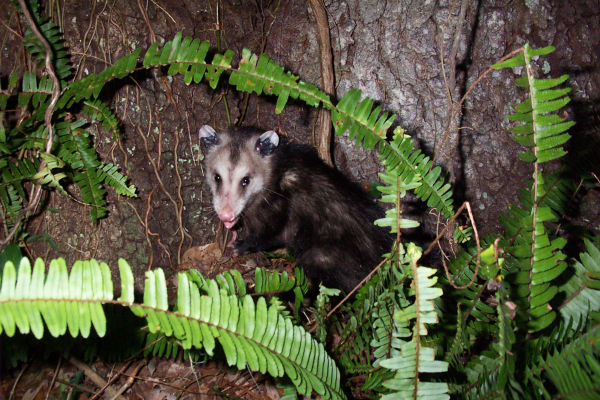 Opossums are omnivorous, though they are widely known for eating almost anything, even garbage. They are considered to require high amounts of calcium, so in order to obtain this, they often eat the remains of roadkill. They are also known to eat dog food, cat food, compost, and human food waste.

However, different species of opossum consume different volumes of meat and vegetation. Some, such as those of the subfamily Caluromyinae, consume practically only fruit. Others, such as the little water opossum, mainly eat other animals. The yapok consumes water-creatures such as crayfish and mollusks. Finally, the brown four-eyed opossum feeds on a variety of these things, but predominantly eats insects. Opossums are also widely known for being able to remove ticks from their own bodies, by eating them. They also eat grass and hunt mice, birds, worms, snakes, and chickens.

Being scavengers, opossums are known to visit human dwellings and raid a variety of containers, including garbage cans, searching for food. This can be useful since they will clean up knocked over garbage, eat small invasive insects and rodents, and consume fruit that has fallen from trees. 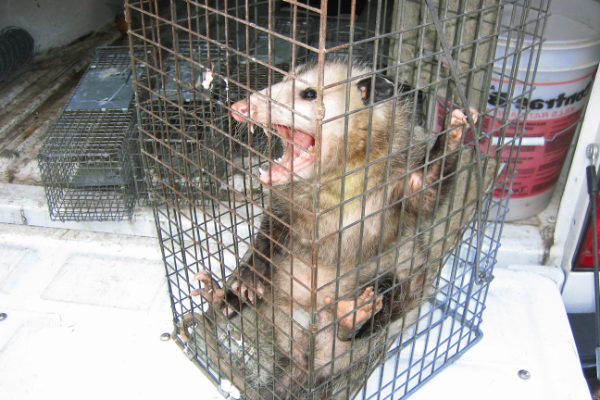 Opossums are solitary creatures, tending to live alone when they aren’t breeding. Sometimes, however, families may group and live together.

Female opossums can give birth to up to twenty babies in a single litter (seven on average), but most of the time, less than half survive. Usually, the mothers are able to have two or three litters per year. Once born the babies are extremely tiny, so, like other marsupials, they immediately move to the mother’s pouch for protection, where they hold onto and nurse from a teat, and continue their growth for several weeks. Up to thirteen young can attach to a teat, depending on the species of opossum.

When they are large enough to leave the pouch they may be seen sitting or clinging tightly onto the mother’s back as she travels in search of food. The mother never leaves her babies behind. Eventually, they become large enough to leave and find their own home. Opossums tend to live between one and two years in the wild, but can live longer – four years, and even more – in captivity.

Opossums are nocturnal, meaning they are only active during the night. They prefer to travel over land but they are also very good swimmers and skilled at climbing trees, and can spend a lot of time above the ground. Their sharp claws allow them to dig into tree bark, and their tail is able to grip, so, therefore, can be used as an extra limb.

Often opossums, usually the younger ones, may be seen dangling by their tails. The tail is also used for transferring materials to build a nest. In general, opossums are fairly slow – much slower than other marsupials, such as kangaroos.

When they feel threatened opossums produce a very strong and unpleasant odor. They are also well known for “playing possum”: pretending to be dead. They often let their eyes fix on space and extend their tongues, and their mouths may foam with saliva, often giving the impression of them having rabies.

This often surprises or confuses their predator for long enough that the opossum has time to escape. The reaction will last between a few minutes and four hours, and its initiation is signified by ear-twitching. This is not a consciously-induced response but an involuntary physiological reaction. They are not violent creatures, and their seemingly aggressive hissing is only intended to look vicious, instead of effecting or symbolizing the approach of any true violence. 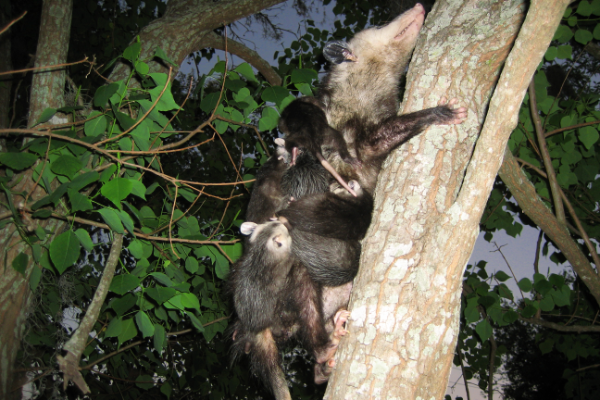 The opossum can be found in many different habitats across the U.S., except the western plains, the northern region, and the Rocky Mountains. They are also found across Canada, and Central and South America. Recently, opossums have been moving north. They are able to survive in a wide variety of conditions and locations because both their diets and their reproductive behaviors are highly flexible. They are often semi-arboreal (living in trees), but this is not always the case.

They will often seek out pre-existing structures that can act as a shelter, such as brush piles, other animals’ burrows, hollow logs, and even garages. Often they live in tree holes or in structures created by other animals and don’t tend to put much effort into creating their own. They prefer dark areas, whether below or above ground. They tend to favor environments that are near water sources such as streams and swamps, but they can also live in arid environments or open fields. They also prefer environments providing a food source. They are nomadic, meaning that they stay in an area as long as food and water are available, and afterward move on. Their flexible habits and biology allow them to live almost anywhere.