You can find the house sparrow almost everywhere, making it a widespread little bird. It has been introduced in many places including, North, South, and Central America, Africa, and also Eurasia.

These birds have displaced other birds from their nest, especially when they migrate to a new habitat. Sparrows have learned to live with people, and this makes it possible for them to live in many locations compared to other birds. They live in urban and rural settings in close proximity to human beings.

Both the female and the male look similar, but there are distinct aspects that make them different.

The male house sparrows are generally brightly colored, with white cheeks, and they have a black patch on their throat, which makes them different from the female bird. However, some male birds look grubby and dull.

The females are a plain buffy- brown, and their backs have black and brown patches. The house sparrow usually takes a dust bath, and it throws the soil into the feathers as if it were taking a bath with water. 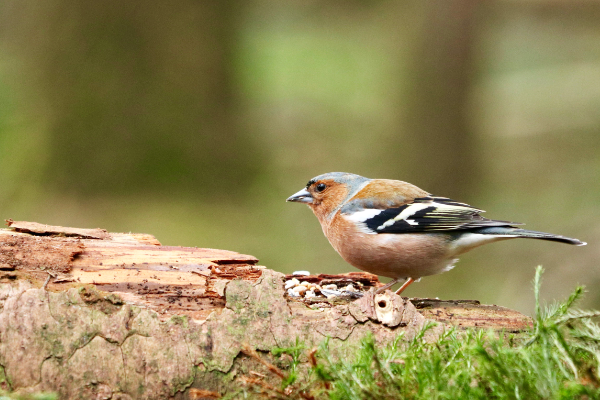 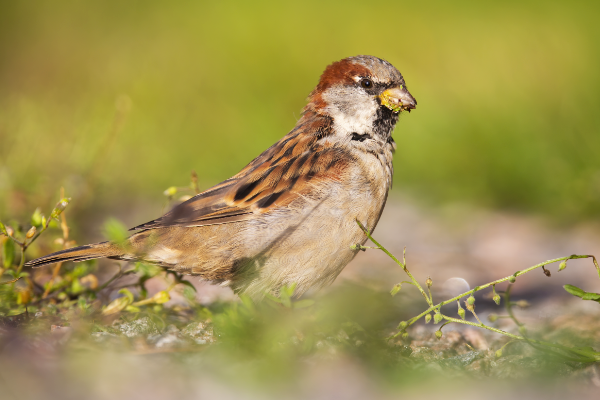 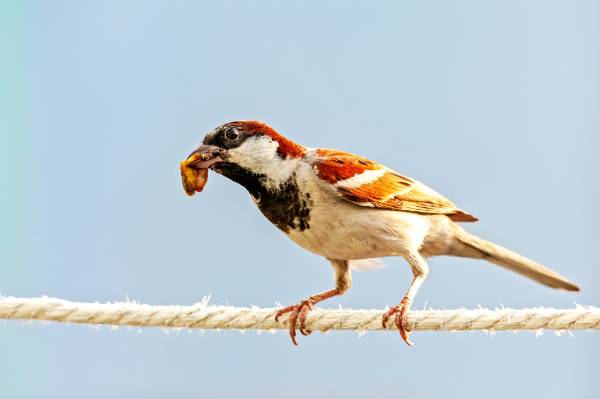 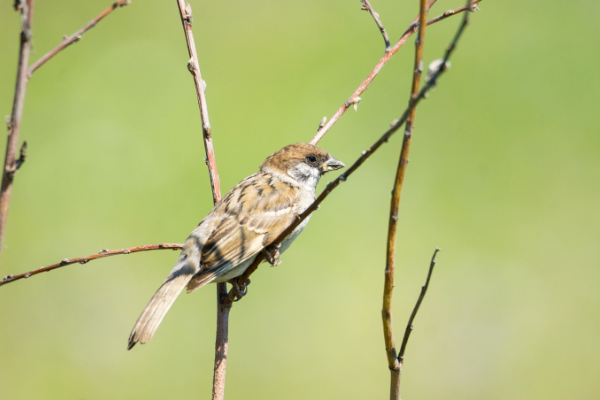 Sparrows are omnivores, and therefore they feed on small animals and plants. They eat mostly grains, seeds, and livestock feed. In addition, they also feed on crops including, wheat, corn, and sorghum. During the summer season, the bird also feeds on insects and other wild foods. Depending on the location of the bird, they also feed on discarded food.

The house sparrow mostly hops compared to walking on the ground. These birds are very social, and they like feeding in crowded flocks. House sparrows have also developed ways in which they show dominance and even submission to the human, which creates a good relationship. What is evident from the behavior of the male and female sparrow is that male domination is largely due to their color complexion, which makes them more unique.

The house sparrow usually lays eggs during the nesting period in early spring and summer. A sparrow will lay between 3- 7 eggs. Once the eggs have been laid, they hatch in 10 to 14 days, and the young house sparrows remain in the nest for another 15 days. What is unique about the sparrow bird is that a pair usually copulates until the period when the female lays her eggs. The male mounts the female on a repeated basis until a pair mates. This leads to a good bond between the birds and allows them to be tied together until they find a nesting site.

House sparrows are not nocturnal birds but can usually be found making night love calls. In some instances, bird experts have noted that there is unusual behavior attributed to the noisy environment. Sparrows will usually sleep standing or sitting in the water or on predator-free “islands”. Compared to other birds such as horned larks, which usually sleep on the ground in the dense vegetation. It’s very hard to see the sparrow bird at night since they are sleeping. 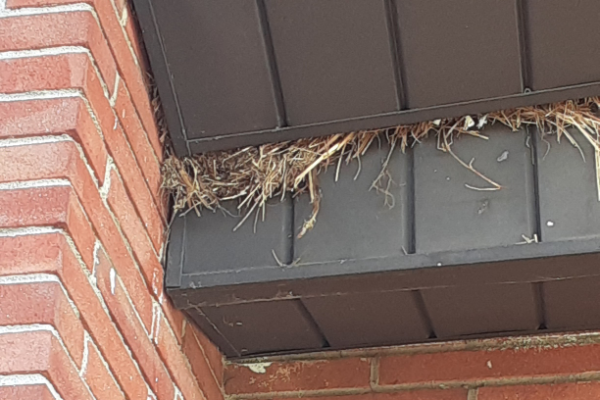 House sparrows have lived with humans for centuries. You can always find the birds on the city streets, but there is a handful which can be found in parks. The house sparrow doesn’t like living in undisturbed forests or grasslands.

With nearly 400 species, sparrows are more diverse compared to other birds. The most common natural habitat where you can find sparrows is an open area, not in thick forests. Due to their behaviors, they have adapted to live with humans, and therefore depend on people for food.

In the urban setting, the birds usually live in buildings close to humans. For instance, they nest in rooftops and building walls where they can get access to food scraps from human beings. At night, the birds sleep with their bill tucked beneath their scapular feathers. During the off reproductive season, the bird would shift to the shrubs for a habitat.

Despite the fact that the sparrow has adapted to the urban life, house sparrow numbers have been falling. A recent study indicates there is an evolution of the species in the various countries where the sparrow lives. However, most of the birds which live in the urban center have shown some level of stress compared to those species which are found in the natural environment. The reason for this stress is due to the level of pollution in the urban environment and an unhealthy diet.

The sound which is produced by the sparrow is nonvocal. They use wing flapping to display and produce sounds. A lone sparrow in the morning may begin chirping to attract other sparrows. Something unique to note about the female sparrow is that they make short chattering sounds when they are chasing off other females. Males and females usually make “cheep” notes, which is an indication of the submissiveness in the flocks.

House sparrows have been living with humans for a long period of time but many people refer to them as undesirables in their homes. Most people think of this species as a menace and, therefore, unsuitable for living with them. They are frequent visitors in our houses and depend on us for food to eat.