How to Identify an Armadillo

Armadillos, of the family Dasypodidae, are armored mammals native to the Americas. Though there are many different varieties of armadillos, only one (the nine-banded armadillo) is common in the United States. The other 20 types of armadillos reside in Latin America—in fact, the name ‘Armadillo’ is a Spanish word meaning ‘little armored one.’

The smallest of their species, the pink fairy armadillo, is merely six inches long with their larger cousin, the giant armadillo, reaching up to five feet in length. The nine-banded armadillo, however, averages to be 2.5ft. When it comes to identifying these mammals, there are a few key considerations. 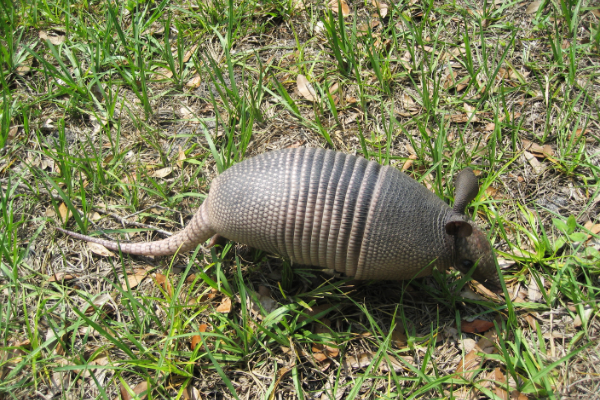 Their appearance, of course, is a defining feature. Though each variety of armadillo differs slightly in coloration—from pink to tan to dark brown, the nine-banded armadillo tends to be predominately grey. And they can all be defined by the distinctive armor covering their bodies from head to tail, their sharp claws, and long, pointed noses. Though they are similar in size to opossums, armadillos can be differentiated by the leathery armor covering their bodies, and their lack of hair.

Many would call the armadillo cute, but they can also be quite destructive. With this in mind, how can an armadillo be identified beyond merely their appearance?

In some cases, especially if armadillos are living in residential areas, they may also begin to make noises, “some people complain that armadillos keep them awake at night by rubbing their shells against their houses or other structures.” Therefore, if there are any precise holes or burrows or evidence of nocturnal activity, armadillos may be responsible.

Other than the sound of them rubbing against buildings, however, the nine-banded armadillo doesn’t make much noise—unlike its cousin, the screaming hairy armadillo, which screams when it feels threatened.

Surrounding their burrows, one may also be able to find and identify an armadillo’s droppings. These are usually found in the area surrounding where they are burrowing, and their scat appears in “small groups of inch-long, brown pellets.” If these are noticeable, however, they could cause another potential threat, which is the spread of disease.

Armadillos can carry leprosy and other diseases, including parasites. And “humans who handle armadillo droppings without proper protective equipment put themselves at risk for roundworm infections.” So if you observe any of the signs of armadillos, make sure to act with caution.

Due to their sharp claws, designed for digging, armadillos have incredibly distinct tracks. According to USDA-APHIS, though armadillos have four toes, an armadillo track “usually appears to be three-toed and shows sharp claw marks.” Furthermore, their long tails tend to drag on the ground, so longer, snake-like markings in mud or dirt may also be a sign that armadillos are nearby. They don’t usually move quickly unless threatened by a predator, with an average speed of around one mile per hour, so if their tracks are visible, it is likely that an armadillo has been in that location very recently.

They also do not wander far from the area which they consider to be their territory. In fact, they “rarely stray from a home territory of about one-tenth of a square mile once they've settled in.” So if armadillo tracks have been left in the soil, it is possible that they live in the surrounding area, and therefore may return to the place in which their tracks were left. 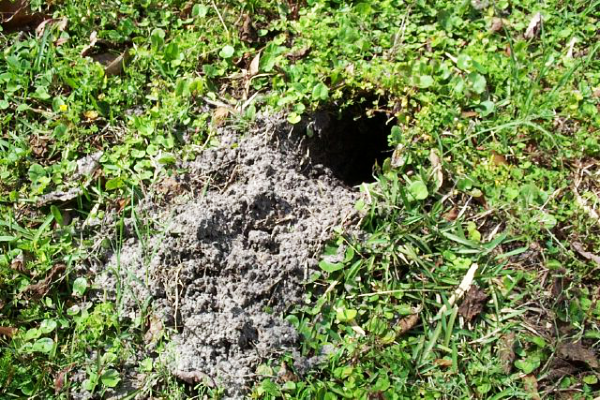 As mentioned above, armadillos can be incredibly destructive. Most of the damage they cause is due to their digging habits. This is because their diet consists mainly of insects found below ground, so they use their large claws to help them unearth their food. The holes left by armadillos when they dig for food are approximately “1 to 3 inches (2.5 to 7.6 cm) deep and 3 to 5 inches (7.6 to 12.7 cm) wide.”

As well as this, armadillos dig burrows to sleep in, which can damage everything from gardens, to driveways, to the foundations of buildings. Furthermore, armadillos are also mostly nocturnal so if the damage is something that occurs overnight, this may also be a sign that an armadillo was the culprit. Though raccoons can also dig and destroy gardens, “armadillos are more precise in their digging. Raccoons just shred the sod in their cumbersome hunt for food.” So when determining whether the damage was caused by an armadillo, look for more clean-cut holes or burrows in the soil. 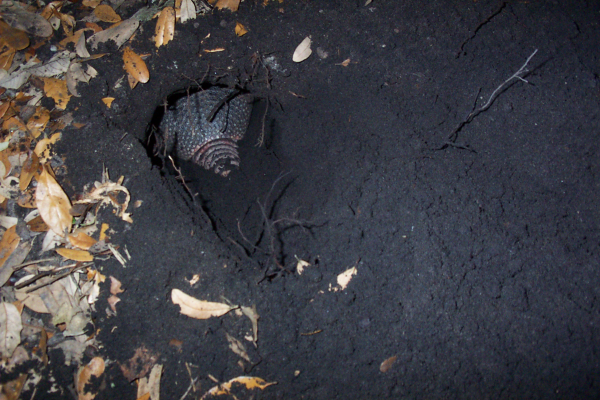 Another important fact about armadillos is that they prefer warmer environments. They are currently residents of the southern states in the US, however, according to the National Wildlife Federation, some have been “spotted as far north as Illinois and Nebraska.” As the climate continues to warm as a result of global warming, these armored mammals are predicted to “reach as far north as Massachusetts.” As a result of this, if not now, then in the next few years, armadillos will become much more common in states that are further north from where they live now. Understanding how to identify them, as a result, will become even more important.

To conclude, armadillos can be identified by appearance, tracks, scat, and damage. The nine-banded armadillo is grey and approximately 2.5ft long, leaves three-pronged tracks and small, brown, pellet-shaped scat, and burrows for food as well as shelter.